Women on the move in the motoring world

Sometimes ideas seem to click perfectly into place like pieces of a jigsaw fitting neatly together and that’s exactly how this feature idea progressed.

It all began whilst watching the news coverage on the seemingly never-ending build-up to the US election. There was a pro-Trump supporter carrying a banner claiming that ‘Women belong in the kitchen’.

Now I’m all for freedom of speech, but two things struck me here. Firstly, that person has never tasted my cooking or would retract those sentiments immediately. And secondly, that person carrying the placard was a woman and that rocked me to the core.

In a day and age where women have campaigned religiously to be heard, chained themselves to railings for the right to vote and faced all manner of discrimination along the way, here was an American (the land of the free after all) setting it all back several decades. It made my blood boil.

But, back in the real world, as a motoring journalist, I’m lucky and privileged to be one of 50 female judges across 38 countries that take part in the vote for the Women’s World Car of the Year (WWCOTY) award. And at the same time this woman was waving her placard, I was invited to join a seminar via zoom in Mexico where the all-new Mach-E, Ford’s first ever electric vehicle, is being built.

The reason this is so relevant is that the first car off the production line was produced, assembled and spray painted entirely by women. It was part of a drive at the Cuautitlan Stamping and Assembly Plant (CSAP) to encourage more women into the once male-dominated industry. And what better what to drum up publicity than get these women behind Ford Motor Company’s first fully electric vehicle.

We caught up with the site plant manager Marcos Madrid, who has stood out in the motor industry for his tenacity and unique leadership for more than 25 years and held strategic positions in Japan, Germany, India and Thailand.

The all-wheel drive Mach-E is a vitally important model for Ford. For the first time in 55 years, the Mustang family is being extended transforming the famous pony into the electric age.

Marcos Madrid explained the reasoning behind this pioneering female-only Mach-E project, which is part of Ford’s vision to be the “leading company for the empowerment and development of women”.

He explained: “Applications for jobs are 70 to 30 per cent in favour of men at the moment. We need to push for more women.

“The plan is to increase the ratio of women at all levels throughout the company and also become the employer of choice for women from a young age with opportunities at all levels including management.”

And it’s a plan that is working as between 2010 and 2019 just six to eight per cent of the workforce were women. This percentage had risen to 23 per cent in 2020 when the scheme was put into place.

The stunning decorations on the car were long thought out and executed with such professionalism. The central image is an eagle woman which was inspired by the knight eagle, representing each woman’s importance. The Warriors in Pink logo is a reference to Ford’s breast cancer organisation and the sunflowers on the boot reflect women’s strength and stability.

It would be impossible to put a price on this one-off Mach-E which is just as well as the vehicle will not be sold, but instead will be used for display purposes.

Now, I felt totally inspired listening to the achievements of these amazing women and I wanted to get involved some way … which was a tad limited during lockdown due to COVID restrictions.

I wanted to build a car too. They did, so why couldn’t I? So I did. I built a brand new Land Rover Defender 110.

Should probably point out at this stage before your impression of me becomes a tad too elevated, this was a Lego version of the Defender 110. But I still built a car. And despite the box claiming it was for ages 11-plus, it wasn’t easy. Really it wasn’t. At the end of about 20 ‘long’ hours I had no fingerprints left on my thumbs or forefingers, but ‘my’ creation of 2,572 pieces was complete and all the bits that were meant to move did move in all the right places. I felt proud with my achievements.

The final piece of the jigsaw puzzle, purely by coincidence once again, is that the all-new Land Rover Defender has just been voted supreme winner in the WWCOTY awards – a worthy winner.

“But cars have no gender and are not subject to stereotypes so the winners of these awards are, quite simply, the best cars in the world. And this year’s top winner is the Land Rover Defender.”

The triumph is the first time a Land Rover has been awarded the top prize by WWCOTY and is the latest in a series of international honours for the most capable Land Rover ever made.

Defender remains true to the pioneering spirit that has been a Land Rover hallmark for over 70 years and redefines adventure for the 21st century. Iconic in name, shape and capability, it is available in a choice of body designs.

Nick Collins, Executive Director, Vehicle Programmes, Jaguar Land Rover said: “This is a huge honour for the whole team and a reward for the hard work that has gone into creating such a capable vehicle. Defender has won more than 50 international awards already, which tells us that our original vision for a 21st century Defender was the right one.

“New Defender combines an unmistakable silhouette with state-of-the-art technology in a design that respects its heritage and delivers authentic Land Rover capability. The result is a family of 4x4s that lives up to the Defender name with durable commercial derivatives, an efficient plug-in hybrid powertrain and our potent new Defender V8.”

But for me now – I’m really looking forward to testing out that new all-electric Mach-E when the opportunity arises.

NEXT: Getting to grips with range anxiety
PREVIOUS: Are we influenced by brand snobbery? 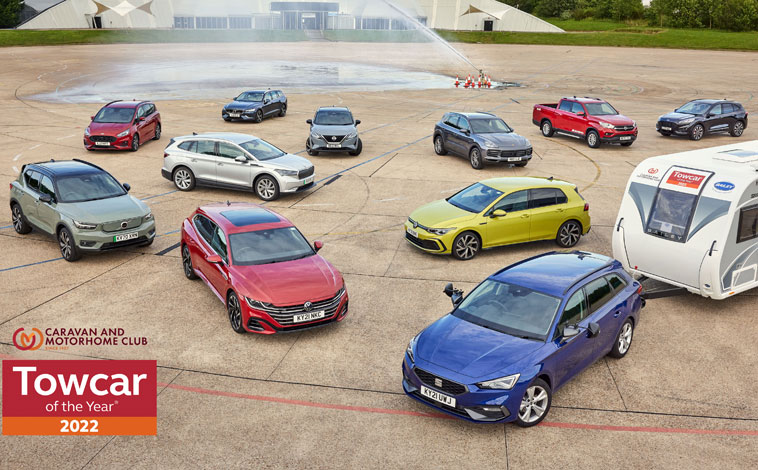 SEAT has scooped the top award at the 39th Caravan and Motorhome Club [...]

MINI has delivered its one-millionth car sold in the UK, just over 20 [...]

The Range Rover Sport SVR goes off-road to pursue James Bond in the [...]

Toyota RAV4 goes on an Adventure

Toyota is widening the authentic SUV appeal of the RAV4 with the introduction [...]

Ford has released some teaser pictures of its latest Ranger pick-up truck which [...]

Volvo has upgraded the technology on its plug-in hybrid 60 and 90 series [...]

Skoda is adding to its all-electric Enyaq iV range with the introduction of [...]

Skoda is expanding its Enyaq iV electric SUV line-up with the arrival of [...]

Kia takes its Soul EV to the Maxx

Thousands of car fans have already flocked to Farnborough to visit The British [...]

BMW has launched a new points system for plug-in hybrid owners designed to [...]

SEAT has added new technology to its mid-size and large SUVs, the Ateca [...]

This website uses cookies to improve your experience while you navigate through the website. Out of these, the cookies that are categorized as necessary are stored on your browser as they are essential for the working of basic functionalities of the website. We also use third-party cookies that help us analyze and understand how you use this website. These cookies will be stored in your browser only with your consent. You also have the option to opt-out of these cookies. But opting out of some of these cookies may affect your browsing experience.
Necessary Always Enabled

Any cookies that may not be particularly necessary for the website to function and is used specifically to collect user personal data via analytics, ads, other embedded contents are termed as non-necessary cookies. It is mandatory to procure user consent prior to running these cookies on your website.